I've written a variety of books and stories so there's something here for everyone:

My non-fiction primer for home building is Building a Cool House for Hot Times without Scorching the Pocketbook (the new edition has color photos); the ISBN number on that edition is 978-1-60749-562-8: Online Bookstore Or you can order it from amazon:http://www.amazon.com/Building-House-Without-Scorching-Pocketbook/dp/1413735215/ref=sr_1_1?s=books&ie=UTF8&qid=1284260474&sr=1-1

It covers the building process and what’s involved in building your home and includes diary excerpts, photos, and advice from planning to punch list and beyond. It got a rave review from The Midwest Book Review and was on the Reviewer's Choice list. Here it is: http://www.midwestbookreview.com/sbw/feb_05.htm#rc

For the kinder, there's Why Won't Anyone Play with Me? Why doesn’t anyone want to play with Kallie Kitten? Why do they jump into the pond or hide? Will anyone ever talk to her? Will this frisky little kitten learn to play their games?

Illustrator Andrea Gradidge was originally from the UK and now resides in British Columbia, Canada. She has illustrated various chapbooks and e-zines and also my story "Sammy's Beautiful Tail."

Children will enjoy this colorful picture book and the cut-out critters at the end. It is available online at Barnes & Noble: http://search.barnesandnoble.com/booksearch/results.asp?WRD=Why+Won%27t+Anyone+Play+with+Me%3F&r=1

Aliens, Animals, and Adventure is my short story collection: http://www.anthologybuilder.com/view_template.php?template_id=196

Sugar Time is an audiobook of three time travel tales with sound effects & music. Check it out at: http://hadrosaur.com/audio_books.html

Magistria: The Realm of the Sorcerer is a shared world anthology of mages and magic; it includes my story, Seedlings, in which plant mages fight alongside their sentient plant companions. You can buy it on amazon: http://www.amazon.com/Magistria-Realm-Sorcerer-Robert-Santa/dp/0981932320/ref=sr_1_1?ie=UTF8&s=books&qid=1232426222&sr=1-1
Posted by Joy V. Smith at 9:30 PM No comments:

Check out the December/January 2010 issue of Country Living for holiday ideas, including using wrapped hard peppermints instead of Styrofoam peanuts for packing gifts. There are some great Christmas decorating, dessert, and gift suggestions, but I draw the line at hanging white fluffy, feathery angel wings on my dining room chairs.

You can also learn about collectible nutcrackers and their history, starting in 6000 B. C. and find earth-friendly pet products at harrybarker.com Speaking of puppies, that is a wonderful idea about covering a box spring with a colorful sheet. It's an idea whose time has come at my house since Blizzard chewed up the corner of my box spring.
Posted by Joy V. Smith at 12:36 PM No comments:

I finished my 50,000 words yesterday; now I have to finish the story--and catch up with other projects and chores.
Posted by Joy V. Smith at 7:06 PM No comments:

Happy Thanksgiving!
We usually have our Thanksgiving feast the day before Thanksgiving Day so that we can keep that day clear for a Thanksgiving service, going to show, relaxing or whatever. This year we had it two days earlier--on Tuesday--so our guest could work it into her schedule. (The holidays can be hectic!)

Yeah, we start eating lefovers before everyone else, but we make a side dish or two to go along with the leftovers each day. Yesterday we made a fruit salad (this needs more bananas!) and baked acorn squash. Today it was a fresh batch of rolls and a baked sweet potato dish. (We just got the recipe from a friend.)

No Black Fridays for us either. It's chores, shopping, and getting ready for company this weekend. (At least I should finally be finished with my 2,000 words a day and get back to my other writing. Okaay, Okaaay. Don't nag. I do have to finish this novel 'cause it's going to be way over 50,000 words!)
Posted by Joy V. Smith at 12:52 PM No comments:

I continue to persevere on my latest novel. Meanwhile, a number of my short stories (reprints) are available in Aliens, Animals, and Adventure. It's available from Anthology Builder:
AnthologyBuilder: Aliens, Animals, and Adventure by Joy V. Smith
Here's the Table of Contents:
The Doorway: Nessa stumbles into the time corridor while helping a friend.
Guard Dog: Sequel to The Doorway. Nessa travels to the time of Earth's first contact.
Pretty Pink Planet: Heroine tracks down planet pirates; saves aliens.
Hot Yellow Planet: Sequel to PPP. Lori and Chiing continue their adventures, meeting up with Chameleons, Ghosters, Splurts, and other aliens and humans.
Flashback: Chessies’ arrival in an ice age. Companion story to Sugar Time stories (audiobook).
Stray Cats: Cats, herps, and humans--sometimes interchangeable.
To the Last Drop: Those aliens should not have touched that coffee urn.
Pilot's Course: Terran humans in the far future settled on other planets. Heroine plots new course.
Moovin' Up: Genetic Engineering.
The Princess Quest: Sword & Sorcery.
When Danger Rules: Reesa came back to rescue the remaining members of the family she loved. Now she had to avoid being killed by her cousin, who wanted the throne, and the new ruler of the planet, who didn't want a throne, and the ones she had come to rescue.
Home Not: When Grief's Aunt Chelsea died, his Uncle Sandro saw his chance, and Grief was at his mercy... Adventure.
The Haunted Garden: Ghosts, Native Americans, and the environment.
Lost in the Long Dark: Boy explores locked hallway in new house; finds danger.
Taking Tawny Home: Sequel to Lost in the Long Dark. Could he take the big cat back?
You Are What You Don't Eat: Why were the Terrans invited to the feast?
Posted by Joy V. Smith at 3:22 PM No comments:

This afternoon three more orphaned squirrels were released into the cathedral oak behind our house. Linda, the wildlife rehabilitator, and her husband brought them over to set them free in our wildlife habitat. The hard part is getting them to come out of their big cage, the only home they've known--for a long time anyway. They finally did climb out, though one hid in their hammock for a bit. Two were siblings whose mother was apparently hit by a car on the road, and one was retrieved from a dog's mouth. Her name is Snuffles because she was bleeding from the nose when rescued, and it took a while to breathe normally. The other two are Stretch (he would stretch a lot) and Little Girl. We kept our dogs inside for a few hours so the squirrels could explore those big branches and gave them fresh water and put some peanuts in the squirrel feeder.
Posted by Joy V. Smith at 12:28 PM No comments:

Christmas is bright, fun, and delicious!

The December issue of Southern Living focuses on Christmas, and it has some of the most scrumptious recipes I've ever seen, including that delectable six-layer cake on the cover. I also liked the Chocolate Truffle Cheesecake topped with a white chocolate snowflake. And there are some lovely ideas for entertaining and decorating, plus home makeovers, an article on a topiary garden, one on two beautiful native hollies--winterberry and possumhaw and how to tell the difference, and more.
Posted by Joy V. Smith at 4:31 PM No comments:

I'm over the halfway mark (34,000 words) now for NaNoWriMo (National Novel Writing Month). I hope I do as well as last year!
Posted by Joy V. Smith at 9:17 PM No comments:

Duct tape is our friend 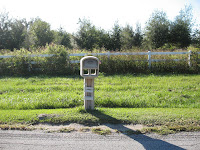 Recently some vehicle whacked our mailbox and knocked it off its post. The post was intact, but the base of the mailbox was badly cracked, though not completely in two pieces. Since we discovered this a couple hours before the mail was due, we decided to try putting it back together with duct tape--or duck tape--as I learned not long ago and mentioned here. It worked and gave us time to go out and buy a new mailbox; however, the new one is much smaller than the old one so we still haven't replaced it. (We taped the mailbox base together and then taped it to the post.)
Posted by Joy V. Smith at 3:12 PM No comments:

Here are some ideas for organizing your calendar so you can enjoy the season: Holiday Organization: Take Back Your Calendar for a More Joyous Season : Decorating : Home & Garden Television

Some of these suggestions involve Just Saying No! Decide what is really important. What would you--and your family--miss? And decide between obligations and choices. And then there's what my mother did sometimes--to our annoyance: Volunteer your kids...
Posted by Joy V. Smith at 12:29 PM No comments:

I especially enjoyed the Old-World inspired ceiling and painting the entrance to a displayed collection in a matching color.
Posted by Joy V. Smith at 11:10 AM No comments:

Acrylic shelves sound interesting, also adding vertical and ceiling interest, and check out that teeny island, but making all my dishware one color and get rid of my Fiestaware! I don't think so!!
Posted by Joy V. Smith at 1:32 PM No comments:

There are some interesting articles in the Fall-Winter 2010 issue of Early Homes (a biannual magazine from Old-House Interiors). There are beautiful homes and gardens, with articles on accessories for the home, including carpets, pewter, pottery, china, fabrics, and early lighting fixtures; and I loved that black granite kitchen sink backspash and the buttermilk-colored cabinets, along with the photos of primroses. What a fantastic collection of colors!

Sparkle note: If you drag a treat from the box, and click on it again, Sparkle will jump up and catch it!
Posted by Joy V. Smith at 11:38 AM No comments:

I love those seasonal colors and decorations! I usually get pumpkins and colorful gourds for the front porch and the house, though I confess that the fanciest thing on my dining room table will be the turkey.
Posted by Joy V. Smith at 4:53 PM No comments:

I've started writing my next novel for NaNoWriMo (National Novel Writing Month); that starts in November, and I've written my first 2000 words. (I try to write 2000 words a day so I don't fall behind.)

The novel I worte last year (also SF) is waiting for a decision by an editor...

And if anyone is going to TusCon in Tucson this month, Sugar Time, my time travel audiobook, will be there. And if you can't make it there, it's also available on the publisher's website: http://hadrosaur.com/audio_books.html
Posted by Joy V. Smith at 5:06 PM No comments: