TS Katia is heading WNW and expected to become a category 1 hurricane Wednesday and a category 3 by Sunday.

Update (8-31): Still not a hurricane, but still expected t0 become a category 3. The spaghetti models mostly agree and have it turning north.

Note: I read in today's paper that on August 31, 1967, a Hurricane Katrina produced a storm surge in Mexico, leaving 1200 people homeless; however, the name was not retired (a controversial decision). If it had been retired, Hurricane Katia would have devastated New Orleans and the Gulf Coast.

Update (9-1): Katia is still a tropical storm, though apparently she was a hurricane briefly while I wasn't looking.

Another note (from a TV weatherman): Lee, who may be forming in the Gulf, was the name of the hurricane after Katrina.

Update: Jose brushed Bermuda and moved away into the ocean.

Hidebound is now available on Kindle

Description: Not long after Anfissa meets Ferenc, a strange humanoid bodyguard, on the space cruiser, St. Catherine, she is forced to flee with him, his dangerous boss, and another bodyguard in a lifeboat during an attack on the cruiser, to a planet where even the grass is deadly. Travelling across the planet to find a small relay station, Fissa nearly succumbs to dehydration and insect bites until Ferenc offers her help unique to his home planet. Note: Adult content.

Irene was upgraded to a hurricane this morning--a category 1. It's still moving WNW, but should stay east of the peninsula, and it's expected to strengthen to a catefory 3.

Update (8-23): Irene is now a category 2 hurricane and the models have shifted even further east. It looks as if it's going to miss the peninsula.

Update: Irene is now a cat 1 and still heading WNW, though the models show it going up the east coast.

Update (8-24): Irene is now a cat 3 (yes, I'm running late) and is expected to become a cat 4. It's moving NW and skirting the east coast; that can change in either direction.

Update (8-25): Irene is still a category 3, and we're getting some rain and a little wind from its rotating rain bands as it heads by and away from us and up the east coast. South Florida got a lot more rain.

Update (8-26): Irene is now a cat 2 and should be a cat 1 when it makes landfall.
Update (8-27): Irene is a category 1 and still moving more or less north (NNE); I think it's one of the hurricanes that was pretty predictable, but I see that a lot of people are stuck in airports for a while. Here on the news our local power company trucks are beginning to head north to help restore power to the northeast.

Update: Irene moved on into Canada eventually, and after the cleanup in the East, a lot of bridges will need to be rebuilt.

It's amazing how all--or most--of the spaghetti models are focused on south Florida--and then Tampa Bay, I heard a weatherman say yesterday.

(Thanks for the heads up, Lloyd.)

Having fun in fall

The September issue of Southern Living includes 101 design ideas--inside and outside. I love the gold sandstone, and the cased opening between the foyer and living room has stone detailing. Impressive. The scraped and painted wainscot--not so much. (It looks like it hasn't recovered from the last hurricane.) There are a number of articles and ideas focusing on the football season, along with gardening and courtyard ideas, Southern cooking, and apple desserts.

TS Harvey is headed west--away from the US. It's way south.

Well, I blinked and missed Franklin, but Gert is heading NNW towards Bermuda.

Update (8-15): TS Gert is heading NNE and should miss Bermuda and then dissipate.

There's an interesting bookcase in the September issue of Country Living. They took a wooden cable spool (they are so great for recycling!) and added 12 dowels--spaced around the spool. You shelve the books in between the dowels. You can paint the whole thing and add castors if you want.

There are some kitchen and home makeovers in this issue too; and the Real Estate Sampler focuses on historic fixer-uppers.

My house remodeling ebook (Remodeling: Buying and Updating a Foreclosure) review is up on this reviewer's blog: The New Book Review

Chrome yellow is HGTV's color of the month. It's bright, but not as bad as I thought it'd be. Check it out: HGTV’s Color of the Month Gets a Smiley Face: August 2011 « Design Happens

I enjoy watching Design Star, and tonight they worked on kitchens, which I'm especially interested in since our recent remodel. The teams worked on four different kitchen layouts: U-shaped, L-shaped, peninsula, and galley. Actually the galley kitchen was wide for a galley since they put a big table in the middle of it. You don't see that every day! Then the teams picked out styles, including contemporary, industrial, etc, as demonstrated by teapots. You might want to catch this episode in the reruns.

I write book reviews--mostly of books I like, if I choose wisely--and my review of Rescuing the Future can be seen in this collection of book reviews: www.TheNewBookReview.blogspot.com
Posted by Joy V. Smith at 12:13 PM No comments:

Remodeling: Buying and Updating a Foreclosure 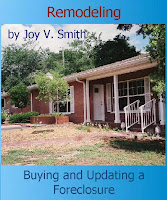 My house e-book, Remodeling: Buying and Updating a Foreclosure, is now available on Amazon kindle: http://www.amazon.com/Remodeling-Buying-Updating-Foreclosure-ebook/dp/B005FSHP0K/ref=sr_1_1?s=digital-text&ie=UTF8&qid=1312428906&sr=1-1

Mix and match is in. You can combine antique and modern or tools/army/masculine with nature/feminine/floral touches. 'Course I've always done that--making use of what I had on hand or found, but it's sort of nice to be cool, though how long will this trend last? Still, animal prints are still hanging on. Check out some ideas at: Eclectic Decor is In: Learn About The Mix + Match Design Trend « Design Happens